Olaf Jackwert, guitarist and guitar tutor at his own Guitar School Jackwert in Braunschweig and Peine released several CDs including his solo-project "JACKwert" as well as the Guitar Duo CD "A Psychoaccoustic Adventure" and worked on several productions as a studio guitar player. 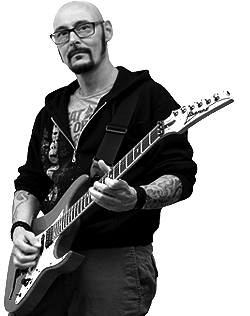 Olaf Jackwert played with / learnd from musical greats as:

He played in many bands with various
styles and did many workshops for: 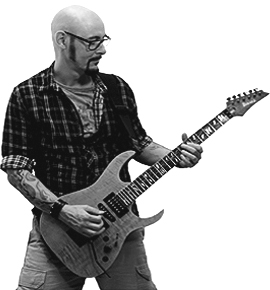 His passion for music started early, but not as expected with the guitar but with the piano and the organ. At age 8 Olaf practiced regularly at the keyboard instruments, but with dwindling enthusiasm.

Once having seen the acoustic guitar of a friend next door his musicial interests were clear: he bought his first acoustic guitar and listened to everything including guitar. Bands like Kiss, Bap, Iron Maiden and later on Van Halen influenced his initial guitar playing tremendously. But also Al di Meola, Paco de Lucia and classical music began to inspire his musicial interest even more.

Aged 14 he made his first experiences in his first band which was more punkrock orientated at this time. This phase was soon over and Olaf founded a band more rock/pop orientated.

He played in an guitar duo and practised enormously, Olaf began his studies at the Universität Hildesheim.

Ever since he wanted to study at the legendary Guitar Institute Of Technology (G.I.T) in Los Angeles which he decided to do in 1994.

He loves to modify his guitars:

Electronics, neckshaping, fretting and other disturbing elements are modified by him to meet his demands on guitars.

Some pictures of different works are shown in the modding photo section.


You can find the Guitar School Jackwert
at the following music stores: